Syria is currently involved in multiple, parallel international armed conflicts (IACs) against the so-called ‘Global Coalition’ (led by the United States), Turkey, and Israel. It is worth recalling that Turkey is occupying parts of the northern territory of Syria, while Israel has been occupying the Golan Heights since 1967.

Similarly, the non-international character of the confrontations between Turkey and the Islamic State and Kurdish groups, as well as for the armed clashes between Israel and Hezbollah, does not change due to foreign interventions.

Operations against the Islamic State, Al-Qaeda, and Kurdish armed groups in Syria

The US-led coalition was created in September 2014 and is currently formed by 83 members, in particular the US, Australia, Belgium, Canada, Denmark, France, Germany, Italy, Jordan, Morocco, the Netherlands, Saudi Arabia, Turkey, the UAE, and the UK. US Department of State, The Global Coalition to Defeat ISIS; The Global Coalition, 83 Partners United in Ensuring Daesh’s Enduring Defeat. Since the beginning of its mandate, it has carried out almost 20,000 strikes in Syria. US-led Coalition in Iraq and Syria, Airways, 2021. In December 2018 the US partially withdrew its troops from Syria. According to its official website, in 2020 the Global Coalition liberated Daesh’s last stronghold in Syria (the city of Baghouz). However, the coalition remains in the territory for prevention and stabilization. See the official website of the Global Coalition.

Over the past years, official representatives of the Syrian Government have expressed their lack of consent over the attacks directed to ISIL and Al-Qaeda on their territory. Notably, the Permanent Representative of Syria to the United Nations has stated on multiple occasions that Syria has not consented to the intervention and that the operations are therefore carried out in violation of international law. Identical letters dated 17 September 2015 from the Permanent Representative of the Syrian Arab Republic to the United Nations addressed to the Secretary-General and the President of the Security Council, UN Doc. S/2015/719 (2015). It should be noted that at first Syria did not protested against the US-led intervention, thus raising the question as to whether it was tacitly consenting to the military operations on its territory. Nevertheless, since September 2015 the Syrian government has reiterated the absence of its consent to the intervention conducted by the US-led coalition. Accordingly, the intervening states have invoked self-defence to justify the use of force against ISIS in Syria.

After a gradual involvement in the Syrian civil war, Turkey started its direct military operations in 2016 against the Islamic State and the Kurds in Syria, without the consent of the Syrian Government. M. Coker, ‘Turkey Launches Fresh Incursion Into Syria’, The Wall Street Journal, 3 September 2016.

Turkey's air and ground operations in Syria target both the Islamic State group and the Kurdish People's Protection Units YPG, an offshoot of the PKK. Wary of an autonomous Kurdish region in Syria, Turkey seeks to prevent the establishment of a contiguous Kurdish region between Afrin and Kobane. In January 2018, Turkey and allied Syrian rebels, namely the Free Syrian Army (FSA), initiated a ground offensive against the Kurdish militia in Afrin. K. Shaheen, ‘Turkey Starts Ground Incursion into Kurdish-Controlled Afrin in Syria’, The Guardian, 21 January 2018; E. Cunningham and L. Loveluck, ‘Turkey says its troops have entered Syria in fight against Kurdish militias’, The Washington Post, 21 January 2018. Clashes and armed confrontations between Turkey and Turkish-backed groups against Kurdish militias continued up to 2021. K. Al-Khateb, ‘New Kurdish Group in Syria attacks Turkish-backed opposition in Afrin’, Al Monitor, 24 April 2021. Turkish operations against the YPG in Syria have been continuing in 2021. A. M. Alhas, ‘Turkish army thwarts YPG/PKK attacks in northern Syria’, AA, 20 March 2021.

Operations against Iranian and Hezbollah targets in Syria

The lack of Syrian consent to the operations carried out by Israel and the US against Hezbollah and Iranian targets in Syria confirm the existence of two IACs between the countries involved.

Over the past years, Israel has conducted airstrikes against Iranian and Hezbollah objectives located in Syria. The Syrian Government denied its consent and accused Israel of committing acts of aggression against the Syrian territory. Letter dated 10 May 2018 from the Chargé d’affaires a.i. of the Permanent Mission of the Syrian Arab Republic to the United Nations addressed to the Secretary-General and the President of the Security Council, S/2018/447, 15 May 2018. On the other hand, Israeli military activities have intensified in 2021. ‘Syria says Israel strikes southern Damascus; Iranian base hit’, Al Jazeera, 20 July 2020; S. Al-khalidi, ‘Israel intensifying air war in Syria against Iranian encroachment’, Reuters, 22 April 2021.

In May 2018, the Quds Forces – a Special Forces unit of the Iranian Revolutionary Guards –allegedly fired 20 rockets on the Israeli-occupied Golan Heights from Syrian. In response, Israel launched a series of attacks against Iranian military targets in Syria, while Iran denied the its responsibility for the attacks. O. Alabaster, ‘Did Iran Attack Israel from Syria and why would they?’, The Independent, 10 May 2018; I. Kershner, ‘Iran Fires Rockets Into Golan Heights from Syria, Israelis Say’, The New York Times, 9 May 2018; ‘Israel responds after Iran ‘fires rockets’ at occupied Golan’, Al Jazeera, 10 May 2018. In January 2019 Israel Defence Forces (IDF) allegedly attacked Iranian targets in and around the capital Damascus, notably a training camp, munitions storage depots, and a site at Damascus International Airport. O. Liebermann, ‘Israel strikes Iranian targets in Damascus after missile fired at Golan Heights’, CNN, 22 January 2019; J. A. Gross, ‘Iran to respond to ‘Israeli Aggression’ in Syria official says’, The Times of Israel, 2 May 2018. The airstrikes in response to the Iranian attacks in the Golan Heights may be considered a distinct international armed conflict. Indeed, the use of force by the Israeli government against Iranian targets in Syria amounts to a parallel international armed conflict between Israel and Iran, on Syrian territory.

In February 2021 the US carried out an airstrike against armed groups supported by Iran, including members of Kata’ib Hezbollah, an Iraqi insurgent group founded in 2007. V. Romo, ‘US Launches Military Airstrikes Against Iranian-Backed Militants in Syria’, NPR, 25 February 2021; Stanford Center for International Security and Cooperation, Kata’ib Hezbollah. Representatives of the Syrian Government stated that the attack was an ‘act of aggression’, thus clarifying that they have not consented to such military operations on Syrian territory. Identical letters dated 26 February 2021 from the Permanent Representative of the Syrian Arab Republic to the United Nations addressed to the Secretary-General and the President of the Security Council, S/2021/197, 3 March 2021.

Operations against the Syrian government

For the official position adopted by RULAC it is not necessary that that use of force is directed to the territorial State in order to apply the law of international armed conflict. Nevertheless, it this case all parties – i.e. the US-led coalition, Turkey, and Israel – have targeted Syrian military objectives and/or have occupied portions of its territory. This confirms the existence of parallel international armed conflicts.

In response to the Syrian government's use of chemical weapons, the United States conducted missile strikes against a Syrian Air Force airfield on 7 April 2017. ‘Syria chemical ‘attack’: What we know’, BBC, 26 April 2017; A. Barnard and M. R. Gordon, ‘Worst Chemical Attack in Syria in Years; US Blames Assad’, The New York Times, 4 April 2017; US Department of Defense, Statement from Pentagon Spokesman Capt. Jeff Davis on US Strike in Syria, 6 April 2017; S. Almukhtar, K. K. R. Lai, S. Peçanha and K. Yourish, ‘Mapping the Targets of the American Military Attack on Syria’, The New York Times, 7 April 2017. In May and June 2017, the US also conducted strikes against Syrian government forces or pro-government militias to prevent them from advancing towards the area of operations of US special forces working with armed opposition groups and shot down a Syrian government fighter plane. M. Ryan, ‘US Launches Rare Intentional Strike on Pro-Government Forces in Syria’, The Washington Post, 19 May 2017; T. Gibbons-Neff, ‘US Conducts New Strikes on Pro-Syrian-Government Forces Threatening US Special Operations Base’, The Washington Post, 6 June 2017; T. Gibbons-Neff and K. Fahim, ‘US Aircraft Shoots Down a Syrian Government Jet Over Northern Syria, Pentagon Says’, The Washington Post, 18 June 2017.

In April 2018, a chemical attack took place on Douma, Eastern Ghouta. The Organisation for the Prohibition of Chemical Weapons (OPCW) specified that initials tests on samples from Douma confirmed ‘various chlorinated organic chemicals.’ Following the attack, the US, UK, and France responded with strikes against key government targets in Syria, notably a scientific research centre in Damascus, chemical weapons storage facilities and a command post. K. Calamur, ‘How will this attack on Syria be any different?’, The Atlantic, April 2018; H. Cooper, T. Gibbons-Neff and B. Hubbard, ‘US, Britain, and France Strike Syria Over Suspected Chemical Weapons Attack’, The New York Times, 13 April 2018. In 2020, another exchange of fire occurred between the US-led coalition forces and the Syrian ones. A. Aji, ‘Syria says US forces clash with Syrian troops, killing 1’, BBC, 17 August 2020; ‘US-led Coalition Clashes With Syria Regime Loyalists’, International Business Times, 02 December 2020.

Turkish and Syrian forces exchanged fire in February 2020 in Idlib, Latakia, and in northern Aleppo. ‘The number of Turkish soldiers killed by regime fire on “Tarnabeh” military post rises to eight’, SOHR, 03 Feburary 2020; S. Fraser, ‘8 Turkish personnel, 13 Syrian troops killed in north Syria’, AP News, 03 February 2018. In the same month, at least 33 Turkish soldiers were killed by the Syrian governmental forces. G. Tuysuz and I. Sariyuce, ‘At least 33 Turkish soldiers killed in an air attack by Syrian regime, Turkish governor says’, CNN, 28 February 2020. As a consequence, the Turkish government initiated military operations against the Syrian army, which were supported by Russia, in Idlib. S. Demirtas, ‘Turkey launches Operation Spring Shield’, Hurriyet Daily News, 02 March 2020. Russia and Turkey agreed on a ceasefire in March 2020. ‘Syria war: Idlib ceasefire between Russia and Turkey begins’, BBC, 06 March 2020. It is worth recalling that Turkey still occupies part of the northern territory of Syria.

Technically, after the Yom Kippur war (1974) Syria and Israel have agreed on a ceasefire which is still lasting today. However, after the breakout of the hostilities in Syria, a number of confrontations between the two countries, especially in the Golan Heights, have occurred, more recently in 2020 and 2021. ‘Israel Carries Out Airstrike on Syrian Anti-Aircraft Battery’, The New York Times, 16 October 2017; Z. Tahhan, ‘Why does Israel keep attacking Syria?’, Al Jazeera, 23 October 2017; ‘Israel strikes Syrian army bases after Golan Heights attack’, BBC, 04 August 2020. Furthermore, Israel has captured the Syrian Golan Heights in 1967 and still occupies the territory. 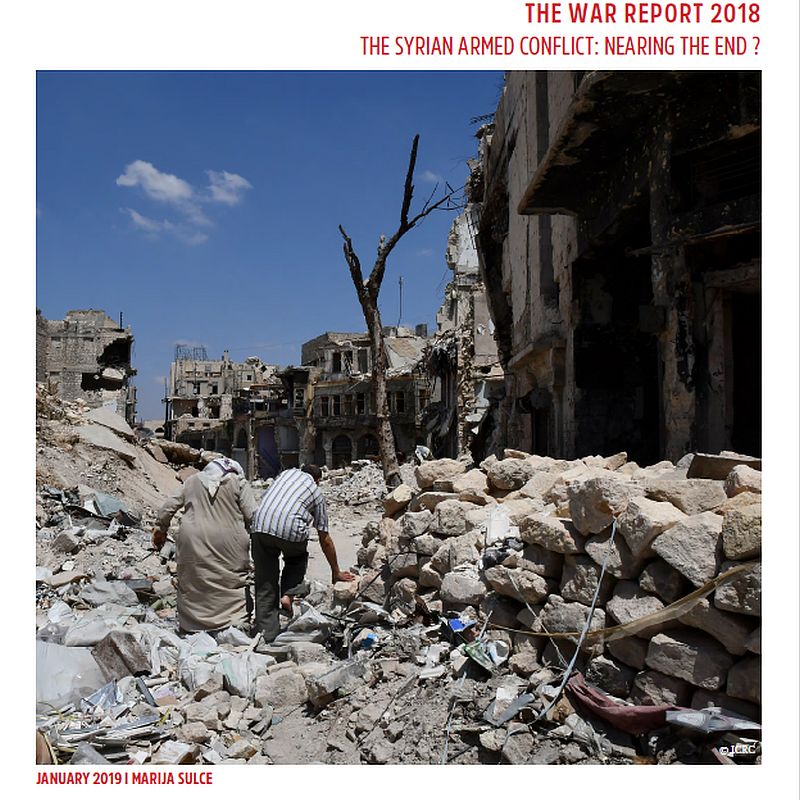