There are multiple and overlapping non-international armed conflicts in Iraq.

Two criteria need to be assessed in order to answer the question whether a situation of armed violence amounts to a non-international armed conflict.

Various indicative factors are used to assess whether a given situation has met the required intensity threshold, such as the number, duration, and intensity of individual confrontations; the types of weapons and military equipment used; the number of persons and types of forces participating in the fighting; the number of casualties; the extent of material destruction; the number of civilians fleeing; and the involvement of the United Nations Security Council. For further information, see 'non-international armed conflict - intensity of violence' in our classification section.

During 2013, the levels of armed violence in Iraq increased significantly and the death toll reached its highest level since 2008. First report of the Secretary-General pursuant to paragraph 6 of resolution 2110 (2013), UN doc S/2013/661, 13 November 2013, §26. Violent crackdowns of anti-government protests in Anbar Province led to new unrest and armed clashes, which were seized by the Islamic State group to expand their operations in Iraq and to assume control over parts of Ramadi and Fallujah by the beginning of January 2014. Y. Ghazi and T.Arango, ‘Qaeda-Aligned Militants Threaten Key Iraqi Cities’, The New York Times, 2 January 2014; L. Sly, 'Al-Qaeda Force Captures Fallujah Amid Rise in Violence in Iraq', The Washington Post, 3 January 2014. In response, the Iraqi government resorted to air strikes against suspected positions of the Islamic State group and started shelling Fallujah. Q. Abdul-Zahra, ‘Iraqi Government: Airstrike Kills 25 Militants’, The Washington Post, 7 January 2014; S. al-Salhy, ‘Iraqi Army Bombards Falluja in Preparation for Ground Assault’, Reuters, 2 February 2014. The Security Council, which had remained largely silent on the situation in Iraq during 2013, issued a presidential statement addressing the worsening security situation on January 10. Statement by the President of the Security Council, UN Doc S/PRST/2014/1. According to the United Nations, the fighting in Anbar Province displaced up to 300,000 people by February 2014. 'UN: Clashes in Iraq’s Anbar Displaced 300,00', Al Jazeera, 12 February 2014.

In light of the use of heavy artillery by the Iraqi armed forces, the frequency of armed confrontations between Iraqi forces and the Islamic State group, the number of casualties, and the number of people forced to flee, the required degree of intensity was reached at the latest by January 2014. See also A. Bellal (ed), The War Report. Armed Conflict in 2014, Oxford University Press, 2014, p 141.

After taking control of Mosul, Iraq’s second largest city, in June 2014, the Islamic State group announced that they had established a caliphate in the territory they control across Iraq and Syria.

In the year 2017, the Islamic State group lost most of the territory it controlled in Iraq and Syria, ending its proto-caliphate. In July 2017, the Iraqi government announced the liberation of Mosul; in mid-October, the group withdrew from Hawijah, their last stronghold in Kirkuk. At the same time, in Syria, it lost its de facto capital, Raqqa. The Islamic State group's tactics in Iraq have evolved since then ‘A caliphate no more — all the land ISIS has lost in the last year’, Associated Press, 9 November 2017; 'With Loss of Its Caliphate, ISIS May Return to Guerrilla Roots', 18 October 2017; H. Hassan, ‘Insurgents Again: The Islamic State’s Caluclated Reversion to Attrition in the Syria-Iraq Border Region and Beyond’, Combating Terrorism Center at West Point, December 2017. It now mainly employs remote violence in the form of improvised explosive device (IED) and isolated suicide attacks. In the first half of 2019, low intensity attacks have been reported in Anbar, Babil, Diyala, Ninawah, Kirkuk, Salah al-Din, Baghdad, Najaf provinces. Even though the group has been avoiding major battlefield engagements, it also undertakes combat engagements primarily with the Popular and Tribal Mobilization Forces, as well as their various constituent militias and tribes. Its militants target their attacks against civilians particularly Shias, Sunni tribesmen perceived to be close to government-aligned militias, those perceived to be collaborating with the Iraqi security forces and individuals representing local governance structures. Report of the UN Secretary General on UNAMI, S/2019/365, 23 May 2019; International Crisis Group, Crisis Watch – Iraq, January to May 2019; HRW, World Report 2019, Iraq – Events of 2018; ‘Iraq: Series of deadly explosions hit Kirkuk’, Al-Jazeera, 31 May 2019. Anti-ISIS operations by Iraqi forces have reportedly been carried out in the Hamrin Moutains, in the Northeast of the country, where Islamic State fighters had regrouped. International Crisis Group, Crisis Watch – Iraq, April 2019.

A series of indicative factors are used to assess whether armed groups exhibit the required degree of organization, such as the existence of a command structure and disciplinary rules and mechanisms, the ability to procure, transport, and distribute arms, the ability to plan, coordinate and carry out military operations, the ability to negotiate and conclude agreements, e.g. cease fire or peace agreements. If the criterion of a minimum organization of the armed group is not fulfilled, there is no armed conflict. For further information, see 'non-international armed conflict - organization' in our classification section.

After both Jabhat al-Nusra and the leadership of al-Qaeda rejected the Islamic State group’s attempt to merge with Jabhat al-Nusra in spring 2013, the group began operating under the name of Islamic State of Iraq and al-Sham (ISIS) in both Iraq and Syria. Fuelled by the armed conflict in Syria, ISIS regained strength and operational capacity in Iraq throughout 2013 and was able to control large swaths of territory. According to some, by August 2013, ISIS was  ‘no longer a small cadre based around a single leader, but rather an effective reconstituted military organization operating in Iraq and Syria’. J. D. Lewis, Al-Qaeda in Iraq Resurgent, Institute for the Study of War, 2013. After taking control of Mosul in June 2014, the group changed its name to Islamic State.

While the Islamic State group is the most prominent armed group fighting against Iraqi government forces, a variety of other anti-government armed groups are active as well. Some of them are entering into shifting and temporary alliances of convenience with other armed groups, including the Islamic State group, in different areas of Iraq, but there are also open hostilities reported between such groups. Yet, it is difficult to assess their relative strength and degree of organization. For further information, see Office of the High Commissioner for Human Rights and United Nations Assistance Mission for Iraq Human Rights Office, Report on the Protection of Civilians in the Non International Armed Conflict in Iraq: 5 June – 5 July 2014, August 2014, pp 3-4. See also the statement by N. Mladenov to the Security Council, 7224th Meeting of the Security Council, 23 July 2014, UN doc S/PV.7224, p 4. See also ‘Harnessing Iraq’s Deadly Array of Armed Groups After ISIL’, War on the Rocks, 15 December 2017.

Upon request of the Iraqi government, an international coalition led by the United States began airstrikes against Islamic Group targets in Iraq in August 2014. Annex to the Letter Dated 20 September from the Permanent Representative of Iraq to the United Nations Addressed to the President of the Security Council, UN doc S/2014/691, 22 September 2014. However, the use of force against a non-state armed group with the consent of the territorial government does not change the classification of the conflict: the armed conflict against the Islamic State group and associated armed groups remains a non-international armed conflict despite the international intervention led by the United States. For further information, see the section on Classification. Since August 2014 and as of June 2019, the coalition has conducted more than 14,000 airstrikes against Islamic State group targets in Iraq. For further information, see the data gathered by Airwars, a non-profit organization tracking coalition airstrikes against the Islamic State group - consulted in June 2019.

However, within the international coalition, some states intervene only in Iraq, some only in Syria, and some in both countries. Currently, France, the United Kingdom and the United States undertake airstrikes in both Syria and Iraq. In the past Australia, Belgium, Canada, Denmark, Jordan and the Netherlands have reportedly carried out strikes in Iraq as well. Airwars, June 2019 Denmark and Belgium have ended their strikes in early 2016 and late 2018 respectively; however, as of 2019, they still provide support to the coalition, in addition to training the Iraqi forces. ‘Denmark to withdraw special forces from Iraq, but capacity-building contingent will stay’, The Defense Post, 17 May 2018; ‘Le ministre présente les opérations 2019’, Defense Ministry of Belgium; ‘"Mission accomplie": voici ce que les forces spéciales belges ont accompli en Irak’, LaLibre.be, 6 February 2019. Canada and Australia also ceased airstrike operations in Iraq and Syria in February 2016 and January 2018 respectively, but they continue to provide air-to-air fueling assistance and reconnaissance flights in support of the coalition in Iraq. ‘Australia to end air strikes against IS in Iraq and Syria’, BBC, 22 December 2017.  In December 2018 the Netherlands announced the end of its air campaign against the Islamic State group in Iraq and Syria but it has kept a ground presence in Iraq since then, including for training and capacity building missions. Dutch Military Contribution in Iraq, Defense Ministry of the Netherlands, consulted in June 2019. Germany also provides air-to air-fueling assistance and reconnaissance flights in support of the fight against the Islamic Stage group in Iraq and Syria. In May 2019, however, Germany and the Netherlands announced a temporary suspension of their military training operations in Iraq due to security concerns. ‘German, Dutch military suspend training operations in Iraq amid U.S.-Iran tensions’, Reuters, 15 May 2019.

In September 2017, people living in the Iraqi Kurdistan region, governed by the Kurdistan Regional Government, voted in favor of independence. D. Zucchino, 'As Kurds Celebrate Independence Vote, Neighbours Threaten Military Action', The New York Times, 25 September 2017; 'Iraqi Kurds Decisively Back Independence in Referendum', BBC, 27 September 2017.   However, the vote for independence has been rejected by the Iraqi government and Iraqi Kurdistan is not recognized as a state. Hence, the independence referendum does not change the classification of the conflict. For the question of secessionist movements and statehood, see 'international armed conflict - secessionist entities' in our classification section. Since the independence referendum, Iraqi government forces re-entered and re-established control over areas previously controlled by Kurdish forces, in particular the contested area of Kirkuk. L. Morris, 'How the Kurdish Independence Referendum Backfired Spectacularly', The Washington Post, 20 October 2017; D. Zucchino and E. Schmitt, 'Struggle Over Kirkuk Puts the U.S. and Iran on the Same Side', The New York Times, 18 October 2017; S. Peçanha, 'Independence in Iraq Backfired', The New York Times, 5 November 2017.

Views of parties to the conflicts and other actors

Amongst the groups fighting against the Iraqi government there are:

The Iraqi government is supported by: 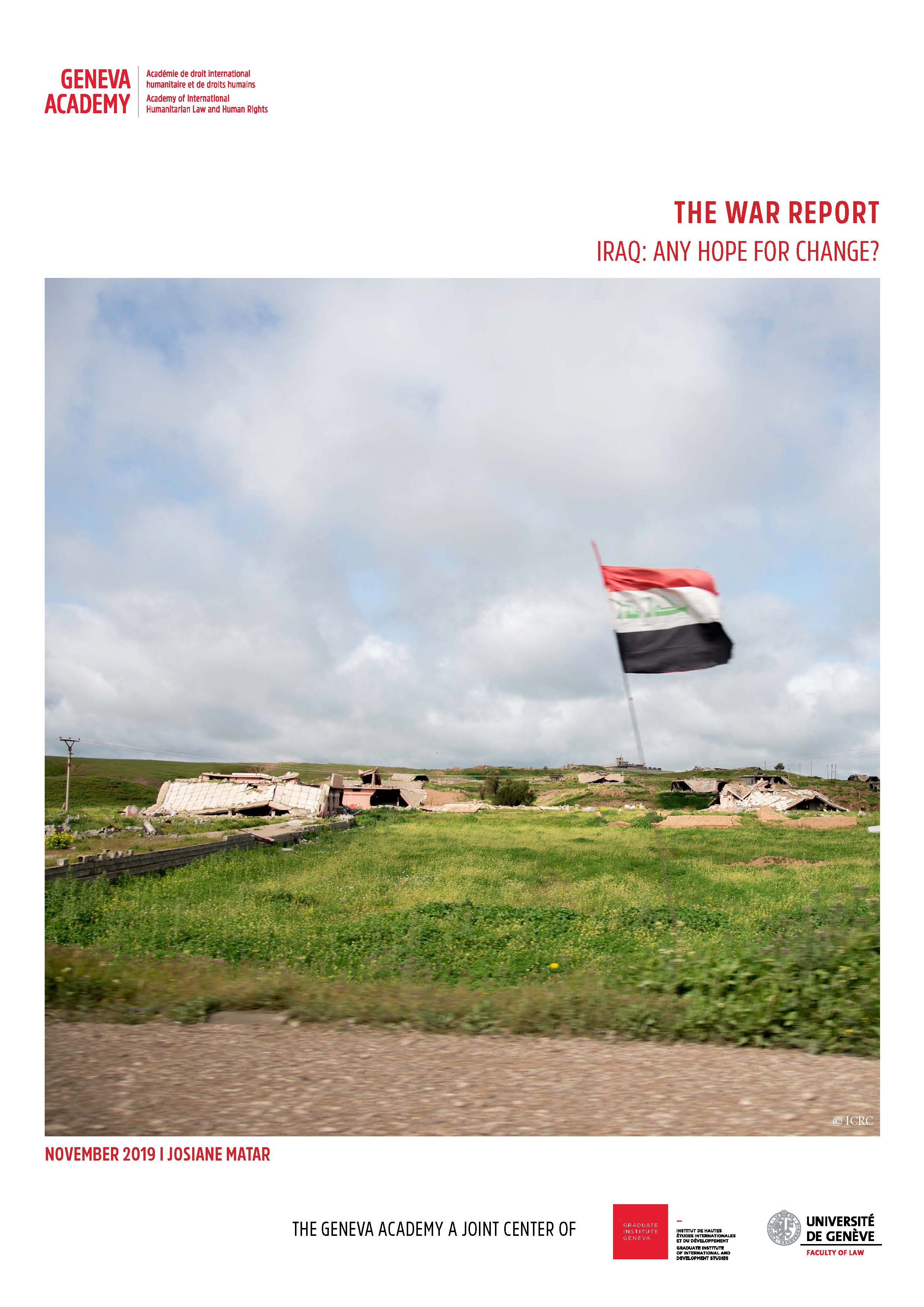