Approximately 1,000 km of Eritrean territory, in and around the town of Badme, is currently occupied by Ethiopia.

Following a border conflict between Eritrea and Ethiopia which started in May 1998, Ethiopia currently occupies approximately 1,000 km of Eritrean territory, in and around the town of Badme. For an overview of the conflict between Ethiopia and Eritrea, see T. Jamal, Ethiopia-Eritrea (1998-2001), Project Ploughshares, 16 February 2002; A. Bellal (ed), The War Report. Armed Conflict in 2014, Oxford University Press, 2015, pp 72ff. Ownership of this area is disputed, but in 2002 the Eritrea-Ethiopia Boundary Commission, established pursuant to the Agreement of 12 December 2000 between the Government of the State of Eritrea and the Government of the Federal Republic of Ethiopia, decided that Badme and the surrounding area formed part of Eritrea, and not Ethiopia. Eritrea-Ethiopia Boundary Commission, Decision Regarding Delimitation of the Border between the State of Eritrea and the Federal Democratic Republic of Ethiopia, 13 April 2002. The Permanent Court of Arbitration serves as the registry for the Eritrea-Ethiopia Boundary Commission and all relevant documents are available on its website.

The 1998 border conflict between Ethiopia and Eritrea involved several weeks of intense fighting near the disputed border town of Badme. Following the adoption of UN Security Council Resolution 1177 (1998) which demanded a cessation of hostilities, UNSC Res 1177(1998), 26 June 1998, §1. the Organization of African Unity (OAU) presented the two countries with a peace plan intended to resolve the conflict. Ethiopia accepted this plan, while Eritrea initially reserved its position.

In February 1999, fighting between the two countries resumed, with each country deploying hundreds of thousands of troops in trenches along the contested border. Jamal, Ethiopia-Eritrea (1998-2001), Project Ploughshares, 16 February 2002. With the assistance of Algeria, a Comprehensive Peace Agreement was signed by the two countries on 12 December 2000 in Algiers to formally end the Eritrean and Ethiopian border dispute. For the text of the Peace Agreement, see the Annex to the Identical Letters Dated 12 December 2000 from the Permanent Representative of Algeria to the United Nations Addressed to the Secretary-General and the President of the Security Council, UN doc A/55/686-S/2000/1183, 13 December 2000. The total number of deaths of both soldiers and civilians from 1998 to 2000 is estimated to be 70,000 to 120,000. T. Jamal, Ethiopia-Eritrea (1998-2001), Project Ploughshares, 16 February 2002.

Pursuant to the Algiers Peace Agreement of 2000, an independent body known as the Eritrea-Ethiopia Boundary Commission (EEBC) was established tdelimit and demarcate the disputed border based on pertinent colonial treaties and international law. Both countries initially agreed to the determ  ation and delimitation of the contested border by this Commission.

The EEBC delivered its decision on the delimitation of the contested border between Eritrea and Ethiopia on 13 April 2002 and found that the town of Badme was part of Eritrea. Eritrea-Ethiopia Boundary Commission, Decision Regarding Delimitation of the Border between the State of Eritrea and the Federal Democratic Republic of Ethiopia, Decision, 13 April 2002. The Permanent Court of Arbitration serves as the registry for the Eritrea-Ethiopia Boundary Commission and all relevant documents are available on its website. This decision was rejected by Ethiopia. Consequently, Ethiopia refused to withdraw its troops from the area.

For a territory to be considered occupied it must be 'under the authority of the hostile army.' Article 42, 1907 Hague Convention (IV) Respecting the Laws and Customs of War on Land and its Annex: Regulations Concerning the Laws and Customs on Land. For an occupation to exist, hostile foreign forces must exercise effective control. Three elements must be fulfilled for effective control to exist.

Therefore, the continued presence of Ethiopian troops in Eritrea’s Badme area, to the exclusion of Eritrean forces, and without Eritrea’s consent, satisfies the test for occupation. As such, Ethiopia has established itself as the occupying power in and around Badme area.

In February 2020, the Eritrean President indicated the refusal to return the territory of Badme by the Tigrayan’s People Liberation Front, regional party in Ethiopia, as an obstacle to the implementation of the 2018 agreements. International Crisis Group, Crisis Watch: Eritrea. Following the outbreak of the non-international armed conflict between Ethiopian armed forces and the Tigray People’s Liberation Front (TPLF) in Northern Ethiopia, in mid-November Eritrean troops were believed to have entered Ethiopia, through the city of Badme, and thus, to be involved in the Tigray conflict. P. Stewart, ‘Exclusive: U.S. says reports of Eritrean troops in Ethiopia’s Tigray are “credible”’, Reuters, 11 December 2020.

The law of military occupation is set out in the 1907 Hague Convention (IV) Respecting the Laws and Customs of War on Land and its Annex: Regulations Concerning the Laws and Customs on Land, the 1949 Geneva Convention (IV) Relative to the Protection of Civilians Persons in Time of War and the 1977 Additional Protocol I applicable to International Armed Conflicts. Both Ethiopia and Eritrea are parties to the four 1949 Geneva Conventions, but only Ethiopia is party to the 1977 Additional Protocol I.

Parties to the conflict 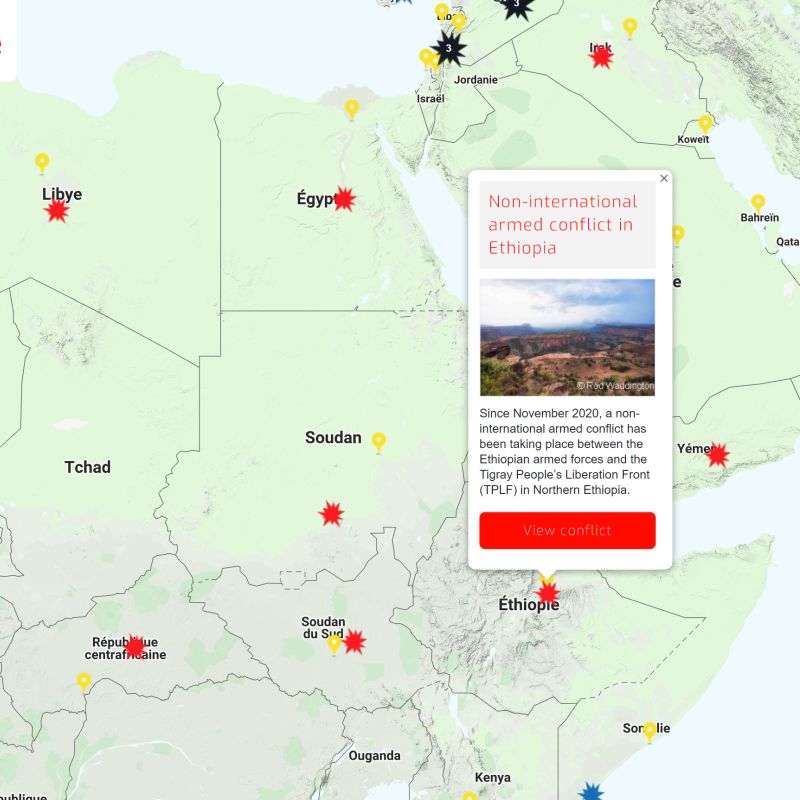