For an international armed conflict (IAC) to exist, there must have been a resort to armed force involving at least two states. The threshold for an IAC is very low and does not require a certain intensity or duration. The existence of an international armed conflict is to be determined by the facts, not the subjective intent of the belligerents. For further information, see the Classification section.

Following the protests of Euromaidan and the consequent fall of the Ukrainian president Viktor Yanukovich in February 2014, Russian soldiers without distinctive insignias allegedly arrived in Crimea, took control of strategic positions, and captured the parliament in Crimea. ‘From 'Not Us' To 'Why Hide It?': How Russia Denied Its Crimea Invasion, Then Admitted It’, Radio Free Europe Radio Liberty, 26 February 2019. In April, concurrent Anti-Maidan demonstrations held by pro-Russian separatists in Donbass (east Ukraine) turned into armed confrontations with the Ukrainian armed forces. After capturing local government buildings, the separatists declared the creation of Donetsk and Luhansk People’s Republics. ‘Armed pro-Russian insurgents in Luhansk say they are ready for police raid’, Kyiv Post, 12 April 2014.

From the outset, Ukraine has consistently claimed that Russian soldiers were participating in the fighting in eastern Ukraine. However, Russia has denied these allegations, claiming that the Russians fighting in Ukraine are volunteers, including discharged members of the Russian army. ‘Ukraine Crisis: Thousands of Russian Fighting in East’, BBC, 28 August 2014, M. Urban, ‘How Many Russians Are Fighting in Ukraine?’, BBC, 10 March 2015. Ukraine has repeatedly captured Russian servicemen in eastern Ukraine. 'Captured Russian Troops "in Ukraine by Accident", BBC, 26 August 2014; A. Luhn, 'Russian Soldiers Captured in Ukraine to Face Trial on Terrorism', The Guardian, 18 May 2015. Locals have also repeatedly claimed that Russian soldiers were fighting alongside rebels. S. Walker, A. Luhn, 'Tension High in Ukrainian Border Towns Menaced by Russian Forces', The Guardian, 30 August 2014. In July 2014, Ukraine accused Russia of having shot down a Ukrainian military plane. 'Ukraine Conflict: Russia Accused of Shooting Down Jet, BBC, 17 July 2014. Both have accused each other of cross-border shelling. 'Ukraine and Russia Claim Cross Border Fire', Al-Jazeera, 25 July 2014. Based on the analysis of satellite images and social media, there is mounting evidence of crossborder artillery shelling since 14 July 2014. Bellingcat, Origin of Artillery Attacks on Ukrainian Military Positions in Eastern Ukraine between 14 July 2014 and 8 August 2014, 15 January 2015; S. Case, Putin's Undeclared War: Summer 2014 - Russian Artillery Strikes Against Ukraine, Bellingcat, 21 December 2016; S. Frizell, 'U.S: Satellite Imagery Shows Russian Shelling Easter Ukraine, Time, 27 July 2014. Finally, there are many reports of Russian soldiers having died in Ukraine. O. Boldyrev, 'Ukraine Conflict: Russian Families Look For Soldier Sons', BBC, 28 August 2014; A. Luhn, 'They were Never There: Russia's Defence for Families of Troops Killed in Ukraine', The Guardian, 19 January 2015.

While at the beginning of 2014 Russian President Putin claimed that the armed forces participating in the capture of the Verkhovna Rada of the Autonomous Republic of Crimea were local forces, in November 2014 he openly acknowledged that the Russian army participated in the annexation of Crimea. ‘Путин признал, что российская армия блокировала украинскую в Крыму’, Украинская правда, 17 November 2014. Furthermore, in December 2015, President Putin admitted the presence of Russian military specialists in Eastern Ukraine. During a press conference, after being asked about the capture of two Russian military intelligence officers in Ukraine, the Russian President conceded that there are Russian officers operating in the country: ‘[w]e never said there were not people there who carried out certain tasks including in the military sphere.’ Nevertheless, he stressed that this was ‘not the same as regular Russian troops.’ ‘Putin admits Russian military presence in Ukraine for first time’, The Guardian, 17 December 2015.

On 25 November 2018, three Ukrainian Navy vessels were fired upon and then captured by the Russian Federal Security Service (FSB) when they attempted to pass from the Black Sea into the Sea of Azov heading towards the port of Mariupol. 24 Ukrainians were captured and sent to prison to Moscow. According to the 2003 Treaty between the Russian Federation and Ukraine on Cooperation in the Use of the Sea of Azov and the Kerch Strait, the strait and the Azov sea are intended to be shared waters between the two states. Nevertheless, Russia claims that Ukraine should ask permission before entering the waters along the Crimean perimeter. Following the incident, the Ukrainian President Petro Poroshenko declared martial law along the Ukrainian border with Russia, which was approved by the Parliament and lasted until 26 December 2018. ‘The Kerch Strait incident’, International Institute for Strategic Studies (IISS).

On 16 September 2016, Ukraine instituted arbitral proceedings against Russia under Part XV and Annex VII of the 1982 United Nations Convention on the Law of the Sea (UNCLOS). On 25 May 2019, the International Tribunal for the Law of the Sea (ITLOS) adopted provisional measures. Specifically, it required ‘the Russian Federation to release the three Ukrainian naval vessels and the 24 detained Ukrainian servicemen and to allow them to return to Ukraine in order to preserve the rights claimed by Ukraine.’ However, it did not consider it necessary to require the Russian Federation to suspend criminal proceedings against the 24 detained Ukrainian servicemen and refrain from initiating new proceedings.’ On the other hand, it ordered ‘both Parties to refrain from taking any action which might aggravate or extend the dispute submitted to the Annex VII arbitral tribunal.’ ITLOS, Case Concerning the Detention of Three Ukrainian Naval Vessels (Ukraine v Russian Federation), Request for the prescription of provisional measures, Order, No. 26, 25 May 2019, §§118-119.

All these factors combined point towards direct Russian involvement in eastern Ukraine, directly in hostile encounters with Ukrainian forces and in support of the rebels since July 2014. Hence, in addition to the non-international armed conflicts between the rebels and the government, there appears to be a parallel international armed conflict between Ukraine and Russia.

Since 2014, the UN Security Council has conducted over 40 meetings discussing the issue of Russian aggression against Ukraine. ‘Russian Aggression’, Permament Mission of Ukraine to the United Nations in New York.

In November 2016, the Office of the Prosecutor of the International Criminal Court concluded in its Report on Preliminary Examination Activities that the available information 'would suggest the existence of an international armed conflict in the context of armed hostilities in eastern Ukraine from 14 July 2014 at the latest, in parallel to the non-international armed conflict.' Office of the Prosecutor, Report on Preliminary Examination Activities, November 2016, §169. For a contrary view, albeit reached at an earlier point in time, see R. Heinsch, ‘Conflict Classification in Ukraine’, International Law Studies 91 (2015), U.S. Naval College of War, p 354. 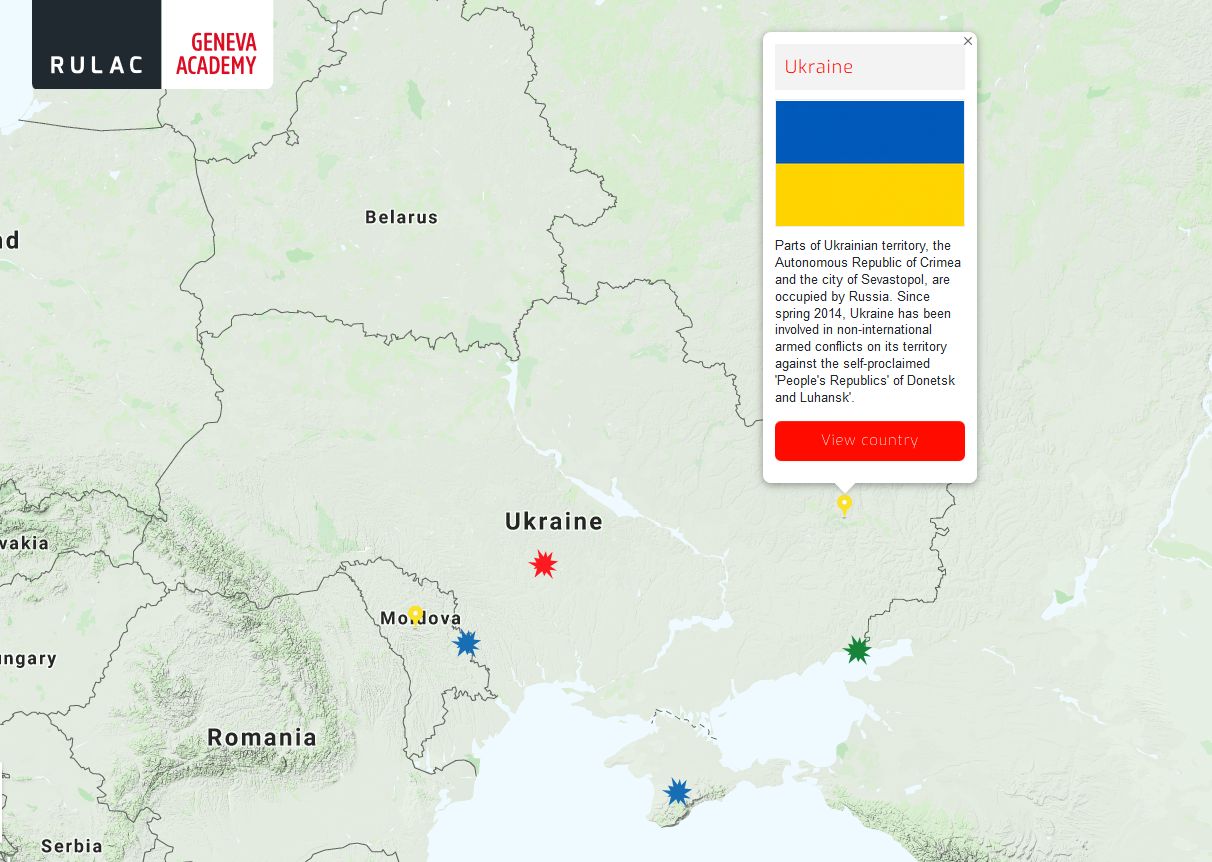