The Government of Thailand is involved in a non-international armed conflict against the Barisan Revolusi Nasional Coordinate (BRN).

Since January 2004, Thailand armed forces have been involved in a non-international armed conflict against the Barisan Revolusi Nasional (BRN) and associated groups in Southern Thailand. Founded in 1963, the objective of BRN is to liberate the southern provinces from Thai rule and establish an independent Islamic state. International Crisis Group, ‘Thailand: The Evolving Conflict in the South’, Asia Report no 241, 11 December 2012, p. 4.

Two criteria need to be assessed in order to answer the question of whether a situation of armed violence amounts to a non-international armed conflict:

Various indicative factors are used to assess whether a given situation has met the required intensity threshold, such as the number, duration and intensity of individual confrontations; the types of weapons and military equipment used; the number of persons and types of forces participating in the fighting; the number of casualties; the extent of material destruction; the number of civilians fleeing and the involvement of the United Nations Security Council. For further information, see ‘Non-international armed conflict – intensity of violence’ in our classification section.

The Barisan Revolusi Nasional (BRN) has been operating in Southern Thailand since 1963. While at the beginning its focus was more religious than military, it also sought independence for the southern Thai provinces. Specifically, BRN has been fighting for the independence of the provinces of Narathiwat, Pattani, Yala and five districts of Songkhla province (Chana, Na Thawi, Saba Yoi, Thepa and Sadao), which are inhabited by the ethnic – predominantly Muslim – Malay population, while the rest of Thailand is mostly Buddhist. S. Casey-Maslen (ed), The War Report: Armed Conflicts in 2013, Oxford University Press, 2014, p. 221; B. Zawacki, ‘Politically Inconvenient, Legally Correct: A Non-International Armed Conflict in Southern Thailand’, 18 Journal of Conflict & Security Law 1 (2012) 152.

Between 2007 and 2012, the intensity of violence between the government and the opposition forces diminished. However, since 2012 armed confrontations have become increasingly common. For instance, on 31 March 2012 at least 10 people were killed and dozens were wounded in a car bomb attack perpetrated by BRN. A few hours later, two more explosions in crowded commercial districts in the same region resulted in several hundred casualties. BBC, ‘Three Deadly Explosions Hit Yala in Southern Thailand’, 31 March 2012; S. Casey-Maslen (ed), The War Report: Armed Conflicts in 2013, Oxford University Press, 2014, p. 222. As violence increased further, in February 2013 the Thai government and BRN agreed to initiate peace talks with the mediation of the Malaysian government. At first, the negotiations seemed promising, as the parties agreed to a ceasefire during the 40 days of Ramadan in 2013. S. Jitpiromsri, ‘An Inconvenient Truth about the Deep South Violent Conflict: A Decade of Chaotic, Constrained Realities and Uncertain Resolution’, DeepSouthWatch, 2 July 2014. However, the Thai government and BRN failed to implement the agreement: after a few weeks relatively free from violence, both parties withdrew from the agreement and reinitiated armed confrontations. S. Jitpiromsri and A. Engvall, ‘A Meaningful Peace: Ramadan Ceasefire Assessment’, DeepSouthWatch, 9 September 2013. Since BRN abandoned the peace talks in 2015, it has been replaced in the negotiations by the MARA Patani, an umbrella that represents a number of opposition groups operating in the south. A. Poejar, ‘Thai Deep South: BRN Rebels Speak Out Against Current Peace Process’, Benar News, 10 April 2017; D. Pathan, ‘MARA Patani and the Question of Legitimacy’, The Nation, 4 September 2015. For the time being, negotiations have proved incapable of reducing violence in the region, while BRN has been trying to initiate bilateral negotiations with the Thai government. D. Pathan, ‘Where Next for Peace Talks in Thailand’s Deep South?’, Benar News, 8 January 2018.

In recent years, violence between BRN and the government did no show signs of ending. In May 2017, two bombs were detonated at a supermarket in Pattani province, leaving 61 civilians injured, including children. Human Rights Watch, ‘Thailand: Events in 2017’, World Report 2018. More recently, on 20 May 2018 almost 20 bombs detonated in locations along Southern Thailand. ‘Terrorists in Southern Thailand Go on a Bombing Spree’, The Economist, 24 May 2018. In September 2018, episodes of violence affected the region on a near-daily basis. International Crisis Group, ‘Crisis Watch, September 2018’.

Between 2019 and 2021, clashes between BRN and Thai troops decreased dramatically. Our sources report that only one episode of violence took place in 2020. Notably, in April security forces killed three BRN fighters. Furthermore, no clashes have been reported in 2021. See, e.g., International Crisis Group, Crisis Watch: Thailand. Although the intensity of violence did not remain stable over the years, this does not imply that international humanitarian law (IHL) ceases to be applicable. Indeed, as specified by the ICRC ‘a lasting cessation of armed confrontations without real risk of resumption will undoubtedly constitute the end of a non-international armed conflict as it would equate to a peaceful settlement of the conflict, even without the conclusion or unilateral pronouncement of a formal act such as a ceasefire, armistice or peace agreement.’ ICRC Commentary to Article 3 to the Geneva Conventions (2016), §488.

In January 2022, peace talks started between the Thai government and the BRN in Kuala Lumpur. However, as the talks resumed, so did the fighting. For instance, on 3 January more than ten fighters attacked Ranger Base 4513 in Narathiwat province, killing one ranger and injuring two. On 31 March and 1 April, representatives of the government and of the BRN met again, a meeting that was particularly significant as members of the military wing of the rebels took part to the talks as well. During the talks, the parties agreed on a truce until mid-April, which was largely respected by both parties. International Crisis Group, Crisis Watch: Thailand.

A series of indicative factors are used to assess whether armed groups exhibit the required degree of organization, such as the existence of a command structure and disciplinary rules and mechanisms; the ability to procure, transport, and distribute arms; the ability to plan, coordinate and carry out military operations; the ability to negotiate and conclude agreements, e.g. ceasefire or peace agreements. If the minimum criterion for organization of the armed groups is not fulfilled, there is no armed conflict. For further information, see ‘Non-international armed conflict – organization’ in our classification section.

Barisan Revolusi Nasional (BRN) was founded in 1963 as a response to compulsory registration of Muslim boarding schools and the imposition of a secular curriculum by the Thai government. B. Zawacki, ‘Politically Inconvenient, Legally Correct: A Non-International Armed Conflict in Southern Thailand’, 18 Journal of Conflict & Security Law (2012) 156. According to Amnesty International, it has been ‘likely the strongest and best organized of the many groups fighting since 2004’. Amnesty International, ‘“They Took Nothing but His Life”: Unlawful Killings in Thailand’s Southern Region’, 27 September 2011. The objective of the armed group is to liberate the southern provinces from Thai rule and establish an independent Islamic state. International Crisis Group, ‘Thailand: The Evolving Conflict in the South’, Asia Report no 241, 11 December 2012, p. 4.

Parties to the conflict 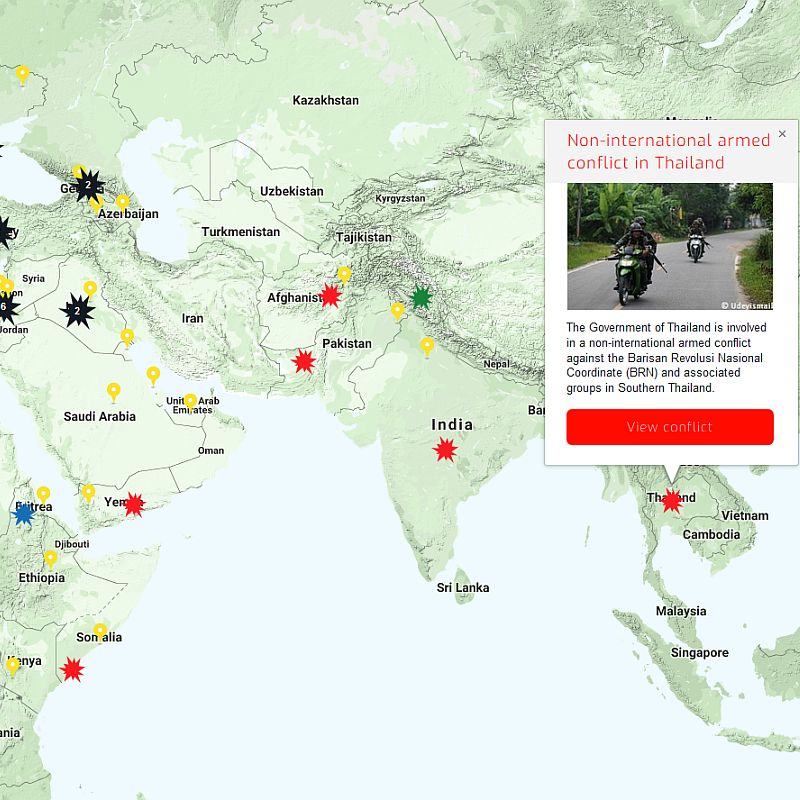